Mold May be the Cause of Alzheimer’s Disease 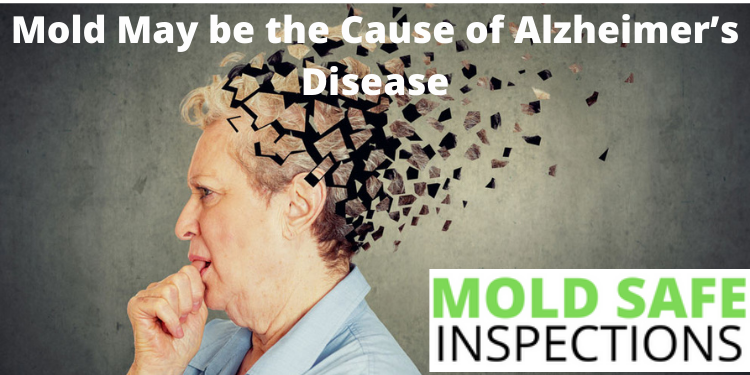 Many people who read my blog know I’m a firm believer that mold (fungus) is one of the main causes of many illnesses and diseases that are currently infecting millions of people around the world. My conclusion is based on hundreds of hours of researching mold, their health effects, and hundreds of scientific studies.

What I would like to share with you today, is my research that shows mold may be the main cause of Alzheimer’s (AHLZ-high-merz) disease. A progressive, and fatal brain disease. The scientific data, symptoms, and similarities between Alzheimer’s disease and people who suffer from a mold illness, I have found to be irrefutable.

According to the Alzheimer’s Association, more than 5 million Americans have Alzheimer’s disease (AD), which is the most common form of dementia accounting for 60 to 80 percent of all cases. That includes 11 percent of those age 65 and older, and one-third of those 85 and older.

Some people begin experiencing symptoms as early as their 30’s. The disease also impacts more than 15 million family members, friends, and caregivers.(1) It has also been estimated that there will be 16 million Americans and 106 million people worldwide with AD by 2050.

The links between mold (fungi) and Alzheimer’s are not a new discovery.

In his 1907 paper, Alzheimer described the presence of plaques and tangles in one case of presenile dementia, whereas Fischer described neuritic plaques in 12 cases of senile dementia. These were landmark findings in the history of research in dementia because they delineated the clinicopathological entity that is now known as Alzheimer’s disease.

Fischer had claimed over 100 years ago that foreign bodies in the brain, possibly fungi, provoked inflammation, and amyloid plaques were a cause of AD. Now over a 100 years later, his theory is being validated by modern science.

It is well known today that Alzheimer’s disease affects the brain and causes problems with memory, thinking, behavior, emotions, and even speech patterns. The most common early symptom of Alzheimer’s is difficulty remembering newly learned information because Alzheimer’s changes typically begin in the part of the brain that affects learning. In addition, some of the key changes in the brain of AD patients are:

It has also been found by mold medical experts like Dr. Ritchie Shoemaker and many other experts, that some of the major symptoms of mold illness is that it causes problems with memory, thinking, behavior, emotions, and even speech patterns.

These issues with memory, problem-solving, inability to maintain focus or complete even simple tasks, and what many people who suffer from mold call a brain fog, are symptoms found in many who suffer from a mold illness (mycotoxicosis). These simple tasks that involve our memories become complicated, convoluted, and we just seem to forget everything.

My family and I were exposed to mold for five years in a home we rented in Carlsbad, California. We all are suffering from mold-related illnesses. Personally, my biggest health issues were allergies, depression, and memory problems (forgetfulness). I often forget simple driving directions on routes I drive every single day.

Remembering the streets is almost impossible. My children’s birthdays have become a blur and I can never remember the day, only the month. My wife sometimes interrupts me mid-sentence when we are talking and I completely lose my train of thought and cannot remember what I was saying.

My writing and spelling skills have deteriorated to the point I often forget how to structure sentences properly, spelling simple words I learned as a child is very difficult and after I correct the error, I forget the next day and make the same mistake over and over again.

These issues of forgetfulness, losing short term memory, and brain inflammation that are common and unique to both AD and mold patients, are key to connecting the two diseases together.

Here is an excerpt from the study:

Our data suggest that respiratory exposure to any mold, not just the particularly toxic ones like Stachybotrys, may be capable of causing brain inflammation, cognitive deficits, and emotional problems.(2)”

In addition to the research above, we now have studies showing that people who died as a result of Alzheimer’s also were found to have fungus/mold in their brains. Not just one species of mold, but several. Not just one patient, but ALL patients!!!

I believe this is the modern day scientific smoking gun, showing that mold/fungal infections may be the cause of AD.

For example, researchers had found in 2014, compelling evidence for the existence of fungal proteins in brain samples from Alzheimer’s disease patients. The study titled, “Fungal infection in patients with Alzheimer’s disease,” stated “a variety of fungal species in these samples, dependent on the patient and the tissue tested.

How common are fungal infections in the brains of AD patients?

In a 2015 study titled, “Different Brain Regions are Infected with Fungi in Alzheimer’s Disease (AD),” researchers had shown the possibility that AD is a fungal disease, or that fungal infection is a risk factor for the disease. The researchers provide evidence in the study that tissue from the central nervous system (CNS) of AD patients contain fungal cells and hyphae.

According to the researchers, “Different brain regions including external frontal cortex, cerebellar hemisphere, entorhinal cortex/hippocampus and choroid plexus contain fungal material, which is absent in brain tissue from control individuals. Analysis of brain sections from ten additional AD patients reveals that all are infected with fungi.

Eleven patients (plus three additional CP samples) are described in this study, as well as in four patients previously analysed, there is clear evidence for fungal cells inside neurons or extracellularly. Therefore, 100% of the AD patients analysed thus far by our laboratory present fungal cells and fungal material in brain sections. Moreover, fungal macromolecules (polysaccharides, proteins and DNA) have been found in blood serum from AD patients, and fungal proteins and DNA were detected by proteomic analyses and PCR, repectively, from frozen tissue of AD brain.

Collectively, our findings provide compelling evidence for the existence of fungal infection in the CNS from AD patients, but not in control individuals.(4)”

Is this just a coincidence or is there a scientific correlation between mold and Alzheimer’s disease?

The study above shows that every single patient that they analyzed with AD had mold (fungi) growing in their brains. The people who did not have AD, had absolutely no mold in their brains. What I have found, is that these coincidences definitely do not stop there. In fact, both Alzheimer’s disease and mold illness seem to almost exactly mimic each other.

One of the pathological hallmarks in brains of patients with Alzheimer’s disease (AD) is the presence of neuritic plaques, in which amyloid deposits are surrounded by reactive gliosis and dystrophic neurites.

A 2003 study titled, “How a Slime Mold Came to the Aid of Alzheimer’s Research,” details how University of Georgia cell biologist Marcus Fechheimer and his research team discovered a structure called a “Hirano body” in a slime mold that is present in increased amounts in Alzheimer’s patients, and that is mostly present in the brain’s major site of learning and memory, the hippocampus. That is where they found Hirano body to accumulate.

The study reports, “What causes neurodegenerative diseases like the most common early symptom of Alzheimer’s which is difficulty remembering newly learned information because Alzheimer’s changes typically begin in the part of the brain that affects learning, is still largely unknown, but something destroys nerve cells in the brain over a period of time as victims gradually lose their minds.”

In the hunt for cause and cure, scientists have focused on various abnormal protein deposits that mark diseased brains. Deposits called plaques and tangles have captured the most attention. Hirano bodies, while not at the forefront of Alzheimer’s research, are another type of protein deposit associated with the disease.

“Hirano bodies are certainly more prevalent in brains from patients who are suffering from dementia, probably any type,” said James Bamburg, one of Fechheimer’s collaborators and a professor of biochemistry and molecular biology at Colorado State University. “Hirano bodies also occur in brains of individuals with normal cognitive function but usually increase in number with age.” (5)

As of this date, there is no clear cause to why some people get AD. In the research I presented above, there are clear links between Alzheimer’s disease (AD) and mold/fungus. Many of the symptoms in both diseases are very similar such as memory and behavioral issues, along with brain inflammation. In addition to this research, I also have my own personal testimony and the testimony of many other people who suffer from a mold illness that have many of the same problems as the people do that suffer from AD.

Not only are the symptoms very similar, but new studies have also found actual mold on the brains of people who died from AD. In these studies, there weren’t just a few people who had mold on their brains, ALL the people they tested had mold. After all, molds essentially a microscopic parasite that feeds and lives off its host. Just like mold takes over a building as it eats drywall and wood, it does the same to us. That would include our bodies and brains.

I personally feel that these links and the evidence are so obvious that it doesn’t take a medical expert to convince me that mold and parasites may, in fact, be the cause of Alzheimer’s disease.

Just think how many of these millions of people who suffer and die from AD had lived and/or worked much of their lives in toxic moldy homes that eventually infected them with mold. A fungal infection that slowly fed on their bodies and brains until they eventually were completely taken over by the mold demons of death.