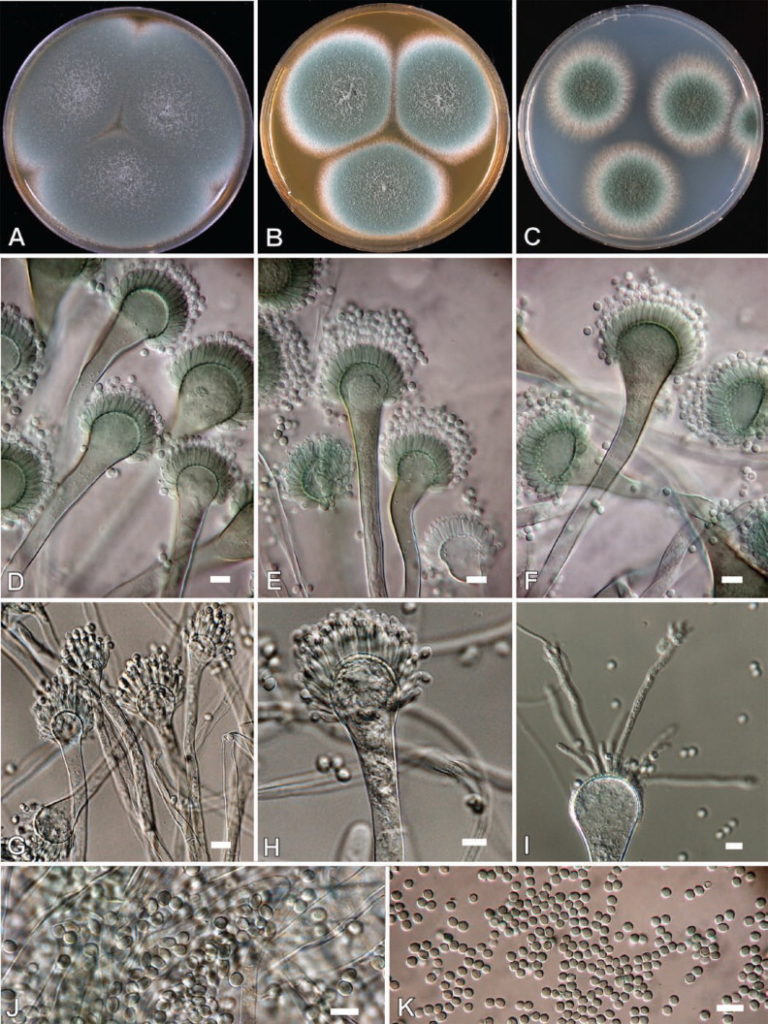 It has been estimated by scientists, that there are 600,000 deaths annually worldwide as a result of this fungus.

Aspergillus is a genus of fungi (molds) that is one of the most common and deadly organisms in existence.

There are over a few hundred species that can be found both outdoors and indoors all throughout the world. But only a few species cause disease, and those same species cause multiple diseases.

The spores of Aspergillus can be found everywhere, growing upon dead organic matter of the most varied kinds, and are spread by microscopic spores which float in the air.

Its development is favored by warmth and moisture, and its spores are often found in enormous numbers in water damaged buildings.

The spores can also be found in water, growing on crops and in the food we eat.

A pathogen is an agent that causes an infection or disease.

The American Academy of Allergy, Asthma & Immunology says that the most common allergy and asthma-causing molds include Alternaria, Aspergillus, Cladosporium, and Penicillium.

A recent study published in The Lancet Infectious Diseases by Radboud university medical center/CWZ and Wageningen University & Research had shown that Aspergillus fumigatus is capable of rapid genetic adaptation in both natural environments and in humans.

Science Daily reports that the researchers found that any change in the methods used to treat a fungal infection can stimulate the fungus to adapt.

This applies equally to starting a new treatment, substituting one antifungal medication for another, or entirely stopping treatment.

Either one of these options may make it difficult to eradicate the fungus from the patient.

This study primarily affects lung patients who are long-term carriers of the Aspergillus fungus, such as patients with COPD or cystic fibrosis. These results call for a modification of the current treatment guidelines.(2)

Illnesses and Diseases caused by Aspergillus

The most common subtype among paranasal sinus infections associated with aspergillosis is A. fumigatus.

Immunosuppression is generally a prerequisite for systemic Aspergillus infections in humans. The incidence of systemic aspergillosis, the most serious form, is on the rise and imposes an increasing medical burden upon hospitals and physicians.(3)

The symptoms include fever, cough, chest pain, or breathlessness, which also occur in many other illnesses such as tuberculosis or chronic obstructive pulmonary disease (COPD), but with otherwise healthy immune systems.

In humans, Aspergillus is found in the mucus of the nasal cavity, in the fluid of the mouth, the lungs, blood and organs such as the brain and heart of infected victims, which, as in most substances exposed to air is subjected to putrefaction.

Putrefaction is defined as the decomposition of proteins and the eventual breakdown of the cohesiveness between tissues and the liquefaction of most organs.

This is caused by the decomposition of organic matter by bacterial or fungal digestion, which creates the release of gases that infiltrate the body’s tissues and leads to the deterioration of the tissues and organs.

Pulmonary aspergilloma is caused by colonization and proliferation of Aspergillus in the lungs.

The fungus mixes with mucus and cellular debris within the lungs to form a aspergilloma or fungal ball.

It is caused by the inhalation of Aspergillus fungal spores. The symptoms include excess mucus, a cough, coughing up fungal balls, chest pain, sputum, hemosputum, hemoptysis or fever.

In most instances, these are less severe, and curable with effective antifungal treatment.

Diagnosis of pulmonary aspergilloma is usually made based on chest X-ray findings, and the Aspergillus precipitin antibody test results (ie, for IgG) are usually positive.

Aspergillomas carry a 40% 5 year survival rate, and it is not clear whether antifungal therapy is helpful. Some people with aspergilloma show progressive form, and is defined as aspergillosis or CNPA, chronic necrotizing aspergillosis.

Why do we get sick from Aspergillus?

It is estimated that most humans inhale thousands of Aspergillus spores daily, but they do not impact on most people’s health due to effective immune responses.

We all breathe them in most of the time, but most of us have efficient immune systems that kill the spores.

However, some people do not manage to kill all of the spores because their immune systems have been weakened due to the mold itself because they have breathed in too many more spores than is usual.

Other environmental and health factors that make people sick, such as toxic environments with many types of pollution, multiple infections, transplant patients, bone marrow transplant recipients, and sometimes because they are genetically susceptible (e.g., some asthma sufferers).

Myco means fungal, and many molds are known to have toxic fungal metabolites that poison humans, animals and plants.

Cells are then deprived of oxygen (O2), so carbon dioxide (CO2) in the blood increases, pH decreases, and the toxic waste accumulates in the blood, tissues and organs.

This also happens in our homes and buildings as mold consumes the structure and releases toxins and gasses into the air.

In an environment where there is a lot of carbon dioxide in comparison to oxygen, CO2 tends to displace any O2 attached to hemoglobin and vice versa.

This carbon dioxide effect caused by mold is the most overlooked symptom, and cause of illness by mold experts and doctors.

You can read more about carbon dioxide and other dangerous chemicals released by these fungi in my article, ‘Why does mold make us sick and cause disease.”

This is what toxic mold does to the human body. It literally breaks down the body, blood, and organs with poisons and gasses such as carbon dioxide that turns to carbonic acid as it eats the person from inside while they are still living.

The toxins and gasses are released by the mold spores to further poison and putrefy the person causing them to become ill, and diseased. A process that makes them sick and may eventually lead to their death.

Why is mold toxic?

Mycotoxins have several adverse effects on human beings, crops and animals that result in both economic losses and illnesses.

Diseases caused by exposure to mycotoxins are known as mycotoxicoses. Acute mycotoxicoses can cause serious and sometimes fatal diseases.

Aspergillus produces aflatoxins that are associated with both toxicity and carcinogenicity in human and animal populations. The diseases caused by aflatoxin consumption are loosely called aflatoxicoses.

Apsergillus has four major aflatoxins, B1, B2, G1, and G2 (based on their fluorescence under UV light (blue or green) and relative chromatographic mobility during thin-layer chromatography) M1 and M2(produced in milk and dairy products). (D’Mello and MacDonald, 1997)

Aflatoxin B1 is the most potent natural carcinogen known and is usually the major aflatoxin produced by toxigenic strains (Squire, 1981). The liver is the primary target organ, with liver damage occurring when poultry, fish, rodents, and nonhuman primates are fed aflatoxin B1.(2)

Aflatoxins are difuranocoumarin derivatives produced by a polyketide pathway by many strains of A. flavus and A. parasiticus; in particular, A. flavus is a common contaminant in agriculture.

Aflatoxins are poisonous and cancer-causing chemicals.

They can be inhaled, ingested, but the most toxic type of aflatoxin, B1, can permeate through the skin. Children are particularly at risk from aflatoxin exposure, which leads to stunted growth, delayed development, liver damage, and liver cancer. Adults have a higher tolerance to exposure, but are also at risk.

This mold along with its aflatoxins and the gasses it produces, can penetrate deeply into the lungs, sinuses and tissues of the body, causing inflammation and swelling, which obstructs the respiration.

At the same time, it produces poisons such as carbon dioxide and oxalic acid that break down the body to cause putrefaction of the blood and organs.

Over the past 10 years, A. fumigatus has become the most prevalent airborne fungal pathogen, causing severe and usually fatal invasive infections in immunocompromised hosts in developed countries.

A fourfold increase in invasive aspergillosis (IA) has been observed in the last 12 years. In 1992, IA was responsible for approximately 30% of fungal infections in patients dying of cancer, and it is estimated that IA occurs in 10 to 25% of all leukemia patients, in whom the mortality rate is 80 to 90%, even when treated.

Invasive infections due to Aspergillus spp. and other hyaline and dematiaceous fungi have emerged as prominent causes of morbidity and mortality worldwide.

Taken together, the major chronic, invasive and allergic forms of aspergillosis account for around 600,000 deaths annually worldwide.

Despite the development of new treatments, mortality due to invasive pulmonary aspergillosis remains above 50%, reaching 95% in certain situations.

The battle against Aspergillus fumigatus involves several components of the pulmonary innate immune system: cells, mediators, and natural antifungal molecules involved in the recognition and elimination of the fungus, thereby preventing colonization of the respiratory system.

Where does the name come from?

The name Aspergillus is derived from the Latin aspergillum, which is the hand-held device that is used by a Catholic priest at mass to sprinkle holy water on the faithful.

In ancient times, Holy Water was a special antifungal mixture that priests had used to treat and cure people during the plague, which many authors and experts, including myself, believe was caused by mold.

This device is made to look like the mold Aspergillus, with a circle or globe (called the vesicle) that is attached to a handle with spikes or holes around the outside.