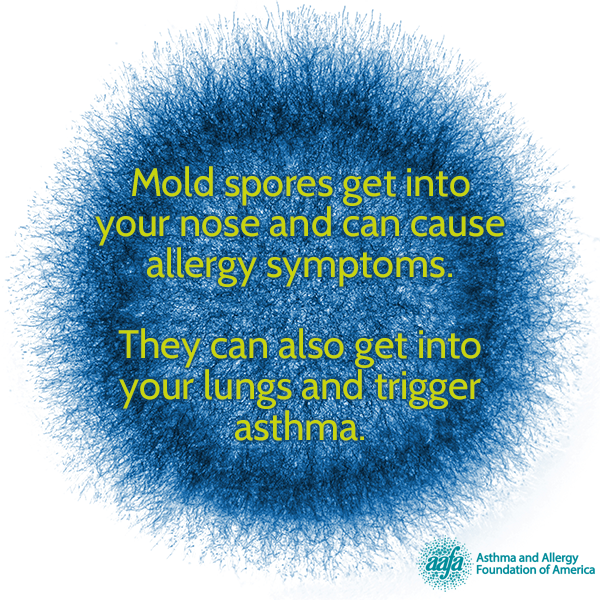 Most people who have asthma assume that pollen, dust, and pets are the main causes of their disease. But science is proving that mold is the prime culprit.

In this article, I would like to share with you some research showing that breathing in mold (fungus) can trigger an allergy and asthma attack and that water-damaged homes have also been directly linked to asthma.

The facts I present to you below are not based on theories, but on proven science.

According to the Asthma and Allergy Foundation of America;

“Mold spores get into your nose and cause hay fever symptoms. They also can reach the lungs and trigger asthma. A chemical released by allergy cells in the nose and lungs causes the symptoms. Sometimes the reaction happens right away.

Sometimes a mold allergy can cause delayed symptoms, leading to nasal congestion or worsening asthma over time. Symptoms often get worse in a damp or moldy room like a basement. This may mean you have a mold allergy.” (1)

Mold is found both outdoors and indoors, and it has been estimated that approximately 50% or more of homes and 85% of commercial buildings have water damage, which causes indoor mold growth. The Center for Disease Control (CDC) recommends that you get rid of mold in your home to help control your asthma attacks.

It is the third leading cause of hospital stays in children. Approximately 1 in 5 children with asthma went to an emergency department for care in 2009, and it is also the number on reason for missed school days. In 2013, it accounted for more than 13.8 million missed school days. Every day in the U.S., approximately 9 people die per day because of asthma. The costs related to asthma exceed $56 billion dollars each year.(2)

As I mentioned above, currently there is no cure for asthma. The only thing people can do is treat their disease with man-made medicines that offer very little to no help, and try to prevent attacks by avoiding the triggers that cause asthma.

We really do not have to look far or do difficult research to find one of the main triggers for asthma.

Many studies have shown that exposure to water-damaged buildings (WDB) has been associated with numerous health problems that include fungal sinusitis, abnormalities in T and B cells, central and peripheral neuropathy, asthma, sarcoidosis, respiratory infections, and chronic fatigue.

A May 2015 study titled, “Mold Allergens in Respiratory Allergy: From Structure to Therapy,” had shown data from several epidemiological studies that provide evidence for the important role of mold and fungi in respiratory disease in the indoor as well as in the outdoor environment. Exposure to mold was found more often in patients with asthma, and is a factor in the development of asthma.

According to the Mayo Clinic:

If you have a mold allergy and asthma, your asthma symptoms may be triggered by exposure to mold spores. In some people, exposure to certain molds can cause a severe asthma attack. Signs and symptoms of asthma include:

The Mayo Clinic said, “Like any allergy, mold allergy symptoms are triggered by an overly sensitive immune system response. When you inhale tiny, airborne mold spores, your body recognizes them as foreign invaders and develops allergy-causing antibodies to fight them.

After the exposure has passed, you still produce antibodies that “remember” this invader so that any later contact with the mold causes your immune system to react. This reaction triggers the release of substances such as histamine, which cause itchy, watery eyes, runny nose, sneezing and other mold allergy symptoms.

Molds are very common both inside and outside. There are many types, but only certain kinds of mold cause allergies. Being allergic to one type of mold doesn’t necessarily mean you’ll be allergic to another. Some of the most common molds that cause allergies include alternaria, aspergillus, cladosporium and penicillium.(3)

I have found that as many as half of all people with asthma also have chronic sinusitis, or sinus infections. In a previous article titled, “Mayo Clinic Study Shows Mold as the Cause of Nearly All Chronic Sinus Infections,” I had shown a 1990 Mayo Clinic study that found fungus (mold) is likely the cause of nearly all chronic sinus infections. “Up to now, the cause of chronic sinusitis has not been known,” say the Mayo researchers: Drs. David Sherris, Eugene Kern, and Jens Ponikau, Mayo Clinic ear, nose and throat specialists.

“Fungus allergy was thought to be involved in less than ten percent of cases,” says Dr. Sherris. “Our studies indicate that, in fact, fungus is likely the cause of nearly all of these problems. And it is not an allergic reaction, but an immune reaction.”

So, approximately 50% of asthma sufferers also have sinus infections, and researchers now say that mold is likely the cause of nearly all of these problems.

A research paper titled, “Chronic Illness Associated with Mold and Mycotoxins: Is Naso-Sinus Fungal Biofilm the Culprit?,” had analyzed various studies showing the relationship between mold, mycotoxins and asthma. They found that patients who develop chronic illness after prior exposure to water damaged buildings (WDB) and mold have the presence of mycotoxins, which can be detected in the urine. (4)

In a study comparing patients with mild-to-moderate asthma with corticosteroid dependent asthmatic patients, about 70% of all participants reported symptoms of rhinosinusitis. In a study done at the Mayo Clinic by, numerous types of fungi were recovered from the sinuses of Chronic Rhinosinusitis Syndrome (CRS) and normal control patients. Among the species recovered, many have the potential to produce mycotoxins including Aspergillus (flavus, niger, fumigatus, versicolor), Chaetomium, Fusarium, Penicillium andTrichoderma.

These molds are some of the most common that can be found in our environment, and especially in water damaged homes.

This group also found “fungal elements (hyphae, destroyed hyphae, conidiae and spores)” in 82 of 101 (81%) of the surgical specimens from the sinuses. Similarly, Braun et al. studied 92 CRS patients and 23 healthy control subjects. Positive cultures for fungi from nasal mucous were found in 91% of CRS patients and 91% of the controls.

Fungi and eosinophilic mucin were the markers of sinus involvement in CRS patients. The species of fungi were very similar to the Mayo study, including potential toxin-producing fungi (Aspergillus, Penicillium, Chaetomium, Trichoderma). Additionally, of 37 surgical cases, 75% had fungal elements (hyphae and spores) on histological examination.

In this paper, the authors state “we conclude that nearly everybody has fungi in his or her nose.”

In a study of CRS patients (n = 79) by Dennis et al., eight patients underwent urine mycotoxin testing for MT that were sent to RTL. Of the eight specimens tested for MT, seven (87%) were positive.(4)

The researchers in this study concluded that indoor water-damaged environments contain a variety of mold and bacterial species that produce mycotoxins, volatile organic compounds, exotoxins and other metabolites that are present in the dust, furnishings and air.

The occupants of these environments experience chronic adverse health effects that range from upper and lower respiratory disease, central and peripheral neurological deficits, and chronic fatigue type illness, among others.

Many of these patients have remained chronically ill despite leaving the moldy environment several years previous to urine testing. Mycotoxin testing revealed the presence of AT, OTA, and MT in nasal secretions, urine and tissues samples as reported herein and by others. Additionally, fungal organisms were recovered in cultures from the sinuses in these three cases including Aspergillus niger, Aspergillus fumigatus and Penicillium.

As I mentioned above, these various types of molds are the most common that are found both outdoors and indoors. The evidence proves that the mycotoxins produced by these molds are the #1 cause of nearly ALL sinus infections, and are most likely the main cause of asthma.

If you suspect that your allergies and asthma may be caused by mold, I would suggest that you perform a DIY mold test of your home, work and school or have a professional inspection done by a certified mold inspector.

You may find out that you have been suffering all along from a water-damaged building that is filled with dangerous toxic mold. If that is the case, you can then take the necessary steps to remove the mold, and or move to a new property in order to save your health.

If you need assistance with professional mold inspection and testing, mold remediation services, or a remote consultation, please contact us by calling 760-818-6830 or online at this link.