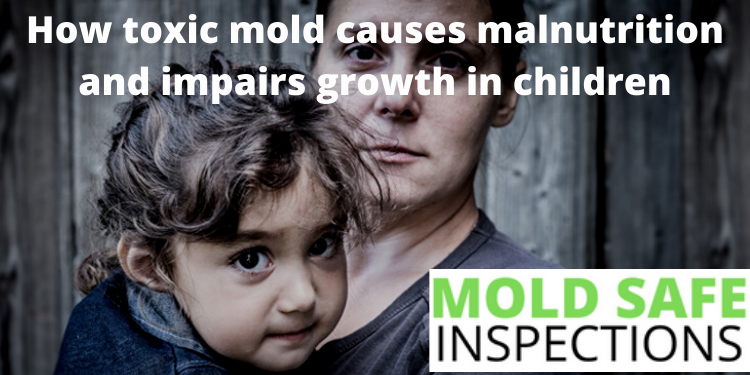 It has been well documented that infants and children who have been exposed to mold and mycotoxins suffer from impaired and stunted growth. My research shows that these children are slowly being robbed of vital nutrients, and vitamins as they are also being systematically poisoned by these mold toxins.

If the exposure is ongoing due to contaminated food and or from a moldy home, malnutrition ensues followed by illness, disease, and even death.

This is a serious issue because malnutrition, impairment of growth, stunting, and wasting in childhood is a preventable health problem that is causing approximately 10 million deaths yearly and is the cause of 50% of the deaths among children aged 5 and under in developing countries.

Studies have proven that toxic molds (fungi) are a big contributor to these deaths.

As I explained in my previous article, Molds (Fungi) Are Parasites That Live Off Our Nutrients, most of these parasitic molds are members of the class Fungi imperfecti, since they reproduce only asexually. The body of a parasitic fungus consists of branching multicellular filaments (hyphae) of the mycelium that it uses to attach to the cell wall of its host (we humans) to absorb its nutrients.

This is what it is doing to us and our children.

In order to understand how molds and mycotoxins impair growth in children, we first need to know the major pathways they use to interfere and steal our nutrients. For example, I had written that mold mycotoxins can interfere with vitamin B12 function and cause B12 deficiencies which can cause symptoms like poor growth and failure to thrive in infants, weight loss, weakness, and anemia.

In addition to causing vitamin deficiencies, these molds have the ability to attach to our cell walls and incorporate into our RNA and/or DNA thus blocking protein synthesis or DNA synthesis. This is one of the main reasons why many people who have systematic fungal infections (mycosis) have muscle weakness, experience muscle wasting and lose a lot of weight.

Now let’s keep this simple. In order to comprehend and defend how these molds and their mycotoxins steal our nutrients, turn off natural occurring bodily processes, and cause malnutrition and impair growth, we need to understand what they do once they are in our bodies. What I have found is that they immediately go to work at breaking us down via 4 crucial pathways.

The 4 main pathways by which molds and their mycotoxins may impair growth are:

As I explained briefly above, the reduced nutrient absorption is caused by the parasitic fungi’s branching multicellular filaments (hyphae) of the mycelium that it uses to attach to the cell wall of its host (we humans) to absorb its nutrients. Then it goes to work on our ability to synthesize and utilize protein.

As I explained in my article, Why you should use whey protein to combat the effects of mold toxicity and illness, protein is one of the three nutrients found in food that the body requires in large amounts. They do most of the work in cells and are required for the production of Immunoglobulin G (IgG) which help make antibodies which bind to specific foreign particles, such as molds, viruses, and bacteria, to help protect the body.

Protein is our natural growth hormone that transmits signals to coordinate biological processes between different cells, tissues, and organs.

The process of how these mycotoxins interfere and or inhibit these pathways is explained very well in a great 2102 study where researchers had found that the three of these proposed pathways cause damage to the intestinal tract, leading to reduced absorptive capacity or impaired intestinal barrier function.

The following section will review the current literature, focusing on the effects of mycotoxins, particularly aflatoxin (AF), fumonisin (FUM), and deoxynivaenol (DON) on the intestine to further elucidate the possible relationship between mycotoxin exposure and growth.

Here  the conceptual framework for the effect of mycotoxin exposure on growth retardation from the study. The proposed pathways are:

The researchers proposed that the intestine is a major target for the toxic effects of all 3, resulting in impaired nutrient uptake and intestinal pathology.

Persistent diarrhea results in impaired nutrient uptake. Altered intestinal architecture and can result in a loss of enzymes, leading to malabsorption of a variety of nutrients; most notably, associated with zinc deficiency. Various mycotoxins may therefore share a convergent pathway in which mucosal damage can lead to impaired nutrient absorption and/or increased intestinal permeability, pathology that resembles the changes.(1)

In another study by scientists from the International Institute of Tropical Agriculture, the University of Leeds, and the London School of Hygiene and Tropical Medicine, had found in 2002 that molds impair the growth of African children. They measured aflatoxin levels in nearly 500 children aged between 9 months and 5 years and found the mycotoxins caused by Aspergillus, aflatoxins in blood samples from 99% of the children.

Further analysis showed that increased levels of mycotoxins were associated with below average height and weight, both of which are indicative of malnutrition. Aflatoxin levels were significantly higher in children being weaned rather than partially breast-fed.

One of the lead researchers, Kitty F. Cardwell, had said, “There is a direct correlation between growth and development in young children and their ability to resist and recover from diseases. This study is significant because it illustrates that there may be a hidden factor, a food-borne toxin, affecting the growth and development of children in Africa.”(2)

A 2013 study had highlighted the development of validated mold mycotoxin exposure biomarkers and their use here to assess the role of aflatoxins in early life growth retardation. The researchers found several key epidemiological studies show strong associations between this biomarker and reduced birth weight or growth faltering, associations that remain after adjustment for confounders.

The researchers concluded that many of the global deaths in children aged less than 5 years old occur in sub-Saharan Africa many of these deaths point to undernutrition and slowed growth as an underlying cause. They said that since mycotoxin-contaminated foods constitute a large portion of daily dietary intake, it was likely the cause.(2)

2014 study investigated the association between child growth and aflatoxin (mycotoxins produced by the mold aspergillus) and fumonisin (mycotoxins derived from Fusarium) exposure in Tanzania. A total of 166 children were recruited at 6–14 months of age and studied at recruitment, and at the 6th and 12th month following recruitment. Blood and urine samples were collected and analyzed for the mycotoxins via the aflatoxin–albumin adducts (AF-alb) using ELISA, and urinary fumonisin B1 (UFB1).

The mycotoxin fumonisin B1 (UFB1) was detected were between 98% and 100%. This study has shown a higher proportion and widespread distribution of stunted growth in these children. The overall proportions of stunted children (LAZ below –2) were 44% at recruitment, 55% at 6 months from recruitment, and 56% at 12 months after recruitment, suggesting that there was impairment of growth.(4)

It has been well documented in these studies above and many more that can be found on the internet that many molds and their mycotoxins can and often do impair the growth of children.

As I have explained before, unfortunately, this happens to a lot of to children who have been exposed to mold mycotoxins and have fungal infections. I witnessed this with my own son Micah who was very sick from toxic mold. His muscles, joints, and body ached all the time.

It got so bad that he could not walk and he was losing weight rapidly. My poor son was literally wasting away right in front of my eyes and not one of the dozen doctors we consulted with could give us any answers or help my son.

Let me remind you of a key piece of knowledge from the 2102 study above where I show that researchers found that the three proposed pathways that are interfered and or inhibited by the toxic molds cause damage to the intestinal tract, leading to reduced absorptive capacity or impaired intestinal barrier function.

This is why it is crucial that you start at repairing your child’s gut health and restore it back to its original state. To do this, you may need to have them on a natural antifungal such as grapefruit seed extract, olive leaf oil, oregano oil, garlic (garlicin) etc. in order to kill any mold that might be hiding and growing in the gastrointestinal tract. You then would need some type of binder like activated charcoal, and or clay to make sure the molds and their mycotoxin do not get reabsorbed back into your child’s bloodstream.

In addition, a great supplement you can give your children to help combat protein synthesis and give them the extra protein they need is whey protein.

As A 2013 study by Dr. Janette Hope, the former president of the American Academy of Environmental Medicine, had said; “Whey protein is used routinely for treatment of illness resulting from exposure to mold and mycotoxins both as a glutathione precursor and as an easily absorbed protein source for patients, many of whom have developed significant gastrointestinal symptoms as a result of their exposure.”