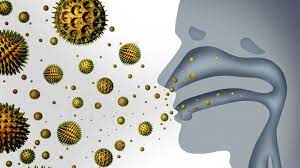 Toxic mold can cause serious illness, disease and even death in humans. Both the mold spores and secondary metabolites, which are known as mycotoxins, can cause serious health effects such as mycosis and a fungal infection.

But before they do, they first need to enter and get absorbed into the body.

Many people who are sick from toxic mold have been mainly exposed via their environments, such as the outdoor air, their homes, workplaces, schools, and even the food they eat.

More than likely, they have stayed in these dangerous environments for prolonged periods of time where they have breathed in, touched, and have also probably eaten food contaminated with toxic mold or possibly all of the above, which could be possible.

These mold spores and their mycotoxins enter our bodies mainly through three different routes.

As you can see, there are multiple routes in which mold can enter into our bodies and these different routes may create different health effects on the individual depending on how severe the exposure is and or the state of their immune system.

For example, inhaling the mold spores may cause what people think are allergic reactions, which are really your body’s immune response to the foreign pathogens entering your mucous membranes, lungs, and infecting the respiratory system.

Scientifically speaking, your body is producing antibodies in order to attack the intruding mold, which is called an antigen.

A 1999 study by the Mayo Clinic, published on ScienceDaily.com had found that fungus (mold) is likely the cause of nearly all chronic sinus infections. They had said that it is not an allergic reaction to mold, but an immune reaction.

“Our studies indicate that, in fact, fungus is likely the cause of nearly all of these problems. And it is not an allergic reaction, but an immune reaction.”

These immune reactions cause allergy-like symptoms such as a burning throat, watery eyes, coughing, sneezing, and inflammation are our body’s attempts to defend and reject these mold spores because it knows it needs to fight against these pathogens in order to keep you healthy.

Over time, living in this moldy environment makes it so you are constantly being exposed which causes your immune system to go into overdrive and it starts to become overtaxed. There is just too much exposure. It can no longer keep up with the cleanup effort and fight.

Now, this is when serious inflammation, illness, and disease can start to manifest. These allergic reactions can then morph into fungal infections because now these mold spores have enough time to start growing in our bodies respiratory system, like in our nasal cavities, sinuses, and lungs.

This is serious because it can then lead to a systematic infection of the blood and organs which is known as mycosis.

Many people will often experience a plethora of symptoms at this point such as sinus infections, lung infections, asthma, ear aches or infections, headaches, nausea, diarrhea, skin rashes or lesions, acne, body pain, chronic fatigue, vision problems, and the list health effects can go on and on.

At this point, people know that something is seriously wrong and they will often seek medical help, not knowing that toxic mold is causing these health problems or perhaps, simply out of desperation.

Unfortunately, this is where more problems may arise because people are often misdiagnosed with a bacterial or viral infection and given antibiotics and or steroids, which actually cause fungal infections to become worse and more pathogenic.

The key to getting and staying healthy after you are exposed to toxic mold is understanding the different routes that mold spores and mycotoxins can enter the body and limiting (avoid) this exposure through preventative methods.

For example, you will need to stay out of known moldy environments, watch your diet,  and also take supplemental vitamins and minerals.

The next step is treating your illness or disease the proper way, which involves a functional and often holistic medical approach that does not involve the use of antibiotics, and steroids but instead uses natural herbal antifungals and binders.

Sometimes this approach may involve a pharmaceutical antifungal and or binder like cholestyramine.