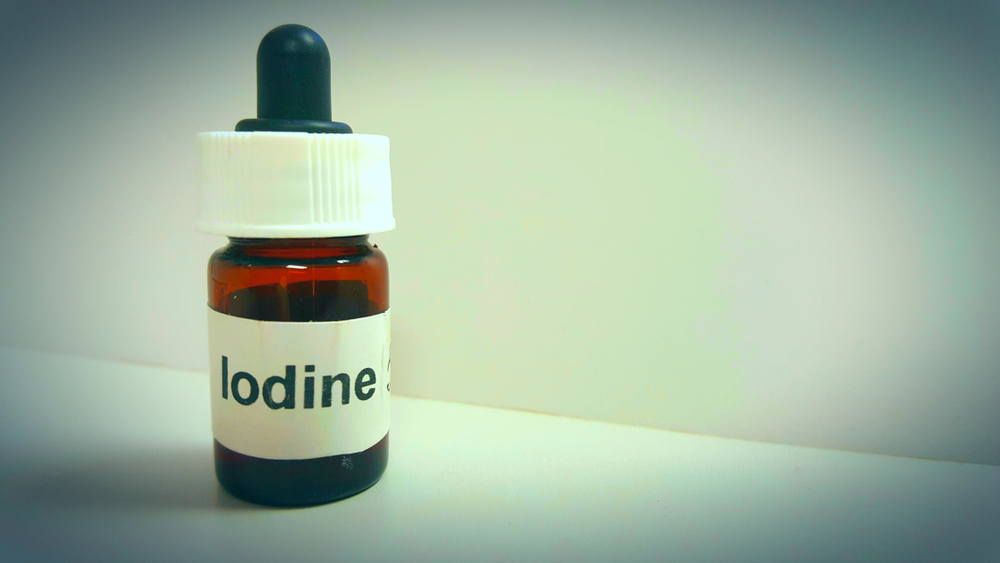 Iodine has been used medicinally for well over 2,000 years.  Many medical doctors in the 19th century claimed it as an empirical remedy, a real ” heroic remedy” —-a true present from the science of medicine to mankind.

Nobel Laureate Albert Szent Györgyi, the physician who discovered Vitamin C in 1928, commented: “When I was a medical student, iodine in the form of universal medicine. Nobody knew what it did, but it did something and did something good.”

Many people who read the Mold Safe Inspections website have issues with toxic mold illness and fungal infections. The good news is that iodine is a great antifungal.

When it is directly applied directly to a mold (fungus) growing on your skin, nails, and teeth, it will kill the mold and bacteria often within 90 seconds and prevent further growth.

It will also kill mold in your body if you take it internally. I know this because I have personally done this myself and have witnessed its powerful antifungal properties on numerous occasions.

But before I get into detail about the medical science behind this great mineral, let me explain the

Potassium iodide (KI) is a salt of iodine. Our bodies need this mineral to function properly but we do not make it naturally. In order to get the iodine that our bodies need, we must get it from our foods and supplementation.

Most of the world’s iodine is found in the ocean, where it is concentrated by sea life, especially seaweed. It is one of several ingredients that can be added to table salt to make it iodized. If you do not regularly eat seaweed or bleached table salt like our family doesn’t, then you will need to supplement with iodine if you want to remain healthy.

But the facts are that billions of people do not get enough of this powerful mineral. The World Health Organization (WHO) reported in 2013, 1.88 billion people, including 241 million school-age children around the globe, have insufficient dietary iodine intake. They said Iodine deficiency is the number one cause of brain damage in childhood.

The National Health and Nutrition Survey from 1971 to 2000 showed iodine levels had dropped 50 percent from 1971 to the year 2000. Cancer may also be caused by an iodine deficiency. A study in 1967 by the Journal of American Medical Association that found breast cancer in mice was linked to iodine deficiency.

It results in impaired cognitive and motor development which affects a child’s performance at school. In adulthood, it affects productivity and the ability to find a job. Iodine-deficient people may forfeit 15 IQ points, and nearly 50 million people suffer from some degree of iodine deficiency-related brain damage.

Our thyroids need iodine to make vital hormones. If we do not have enough, our thyroids start to malfunction and our hormones get out of whack. This can lead to medical complications such as goiter, which is an inflamed thyroid gland, which becomes evident as a swollen neck.

Thyroid hormones are essential for life as they activate key biochemical reactions including protein synthesis, enzymatic activities, and function of target organs such as development of brain, heart, muscles, pituitary, and kidneys.

As you can see from this brief summary, we need this mineral to function properly and a deficiency can cause serious cognitive problems and possibly even cancer.

Medicinally, iodine is a very powerful alternative natural treatment for many illnesses and diseases. It is a very powerful natural medicine against harmful microorganisms such as toxic molds and other toxins that are everywhere in our environment today.

It has a special affinity for the stomach, kidney, and brain when applied internally, but when used externally, it is a very powerful antiseptic and disinfectant.

Iodine can detox you from all types of toxins, bacteria, and molds (fungi) and also protects your immune system from invading microorganisms. To this day, there’s no bacteria, virus, fungus, or any type of microorganism that can survive or adapt to being in an iodine-rich environment.

The U.S. National Library of Medicine says that Iodine is applied to the skin for skin inflammation (dermatitis) and other skin disorders such as eczema and psoriasis, to kill germs and heal wounds, to prevent soreness inside the mouth or along the digestive tract (mucositis), and treat diabetic and other external ulcers.

Iodine is also applied inside the mouth to treat gum disease (periodontitis) and reduce bleeding after the removal of a tooth. Iodine can also be used as a throat rinse to reduce symptoms of pneumonia.

It is such a good antifungal and antibacterial, the Center for Disease Control (CDC) recommends Iodine for the disinfection and sterilization of medical facilities.

Iodine is also used for water purification. NASA also uses Iodine to disinfect their water from harmful organisms such as mold.

The CDC says that it can penetrate the cell walls of microorganisms quickly, and the lethal effects are believed to result from disruption of protein and nucleic acid structure and synthesis.(2)

Dr. Sircus, an acupuncturist, doctor of oriental and pastoral medicine and author, explains how iodine is so effective in killing pathogens:

“Though it kills 90 percent of bacteria on the skin within 90 seconds, its use as an antibiotic has been ignored.

Iodine exhibits activity against bacteria, molds, yeasts, protozoa, and many viruses; indeed, of all antiseptic preparations suitable for direct use on humans and animals and upon tissues, only iodine is capable of killing all classes of pathogens: gram-positive and gram-negative bacteria, mycobacteria, fungi, yeasts, viruses, and protozoa. Most bacteria are killed within 15 to 30 seconds of contact.

Iodine kills single celled organisms by combining with the amino acids tyrosine or histidine when they are exposed to the extra-cellular environment. All single cells showing tyrosine on their outer cell membranes are killed instantly by a simple chemical reaction with iodine that denatures proteins.

Nature and evolution have given us an important mechanism to control pathogenic life forms and we should use it and trust it to protect us in ways that antibiotics can’t.”

In 2006, a retired physician named Russell Davidson had a bad case of toenail fungus, aka athlete’s foot or onychomycosis.

He decided to forego the typical medical treatment with pharmaceuticals due to the excessive costs and nasty side effects that include liver failure.

Instead, he decided to use a $3,27 bottle of iodine and completely cured his toenail fungus.(3)

This is Dr. Russell Davidson’s story, An economical cure, in his words:

“I am a retired physician whose left big toenail became heavily colonized by an unidentified fungus with resultant thickening, opacity and deformation. A respected dermatologist confirmed my diagnosis, but we decided not to initiate any treatment. The cost of oral treatments ranges from about $250 to $500, and there are many serious side effects.

Shortly after the consultation, I decided to undertake a trial of topical iodine. I obtained a bottle of 2.5% iodine tincture at a cost of $3.27, and applied one drop of the solution daily, with occasional lapses, to the tip of the affected toenail. The iodine traveled rapidly into the depths of the affected sufungual tissues.

After 2 weeks, a sliver of normal-looking nail appeared at the proximal end of the affected nail. Encouraged, I continued the treatment. The nail grew at the normal slow rate, and the diseased area gradually moved distally. The nail is now apparently normal.

The total cost of the treatment was $3.27, and half of the original bottle of iodine solution remains for further treatment, if required.

In view of the efficacy of the treatment in this isolated case, it would seem reasonable to institute a trial with a larger number of patients to obtain scientifically acceptable results. However, blinded trials would be difficult, given the telltale color and odor of iodine.

No side effects were observed in the case described.”(4)

A 1984 study used Povidone-Iodine (Betadine) Paint to treat thirteen patients with proven fungal infections of the skin. Ten patients had pityriasis versicolor,  two had trichophyton rubrum and one M. canis.

In the pityriasis versicolor group, seven out of the ten patients were either improved or cleared up completely within 7 days. There were no adverse reactions in this group of patients and the material proved quite acceptable to them.(5)

Dr. Cousens from the Tree of Life Center says, “iodine’s power as a negatively charged substance to destroy all pathogens, molds, fungi, and parasites, including malaria. Iodine can be used both to effectively treat and prevent malaria.

It is the most powerful antibiotic we have, and while it is not patentable, it can help save the world from all these uncontrolled resistant infections. It is also said to be effective in treating tuberculosis. This effect was mentioned as early as June 1st, 1905, in the NY Times.

As more antibiotic resistant bacteria emerge, iodine may become the “new” lifesaver on many levels.”(7)

Iodine Can Help You Detox

I was surprised to find out that it is also a great detoxifer. Dr. Gabriel Cousens says that iodine can help us detox from many harmful environmental toxins which will aid in our recoveries from toxic mold illness. Dr. Cousens had written;

“Another major health protection role iodine plays is to increase the release of toxic halogens (fluorine, bromine, and chlorine) from the cellular systems.

These toxic halogens negatively impact all our organs including thyroid function. With the first dose of iodine given, we have a 78% increase of bromine discharge.

Bromine is recognized as one of the top twelve most harmful toxins on earth. (Bromine is a known carcinogen, which is outlawed in China, Europe, and much of the world except in the U.S.)

Bromine is found in most bakery goods in the U.S. It is also found in pesticide-laden produce, mattresses, cell phones, fire retardants, and hot tubs. We also see a 50% increased discharge of chlorine when iodine is taken.

Iodine also chelates mercury, lead, and cadmium. I would hypothesize that bioavailable, active iodine chelates all positive charged toxins, such as pesticides and herbicides, in general because of its negative charge (I-).

Due to its chelating powers, I suggest one start taking iodine at a slower rate because of this detox effect. It is important to start with a low dose and build up, while checking the urine for discharged toxins.

These healing detox symptoms should not be confused with iodine toxicity.

This is roughly equivalent to focusing on the healing crisis that sometimes emerges when one transitions into live foods or fasting and to blame the diet or the fasting rather than treating the healing crisis as a healthy detox activated by the treatments.

To stop iodine supplementation in both these scenarios is premature and derails the healing process. It is important to look beyond any healing crisis to the wellness that awaits on the other side of this detoxification.”(7)

As you can see from this extensive research, iodine is crucial to our health. Not only do we need this mineral to function properly, we need it to thrive and defend ourselves from harmful organisms such as pathogenic mold, bacteria, and viruses.

I will leave you with a quote from David Derry M.D., Ph.D., a thyroid expert and researcher, based in Victoria, British Columbia, says iodine is by far the best antibiotic, antiviral and antiseptic of all time.

He had written that it is effective “for standard pathogens such as Staphylococcus, but also iodine has the broadest range of action, fewest side effects and no development of bacterial resistance.”

Dr. Derry concluded, “There is a world of difference between using an antibiotic – anti-life substance – and an antibiotic, antiviral and antifungal substance like iodine, which is life serving because it is a basic and most necessary nutritional substance.”(6)