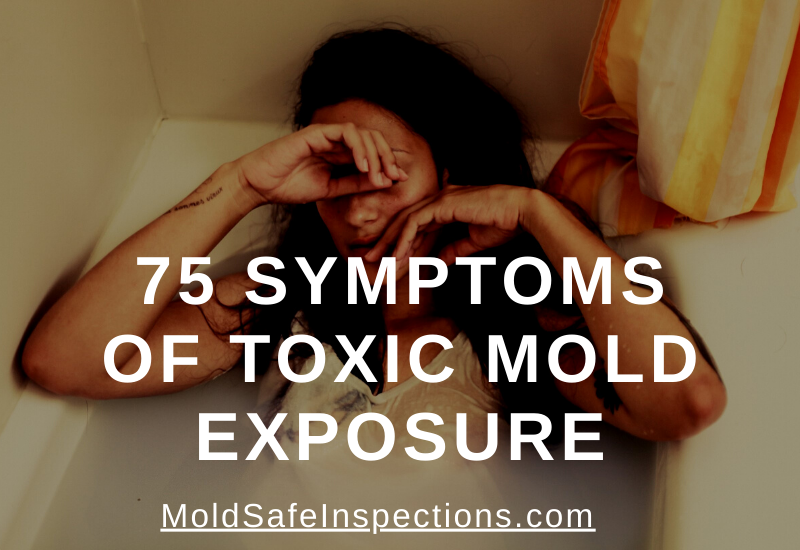 Mold exposure is considered an environmental illness and has been associated with a variety of health problems, including death.

Prolonged exposure to mold can cause severe and dangerous effects, often compounded by allergic reactions to mold spores.

The health effects can vary greatly, depending on the type of mold present, the degree of exposure, and the individual. The most common are aspergillus, Cladosporium, penicillium, alternaria, and stachybotrys (AKA black mold).

Mold releases what are called mycotoxins, which may damage the lungs, brain, liver, kidneys, heart, blood, or nervous system, and induce cancer or other effects.

Mold poisoning, also known as mold illness (toxicity), can result from exposure to these types of mold mycotoxins in the home or workplace.

When people with this genetic susceptibility inhale mold spores or fragments, their immune system responds by releasing histamine and other chemicals that cause allergy-like effects. People who already suffer from asthma or other respiratory problems are especially at risk for its health effects.

If you suspect that mold is making you sick, here are 75 symptoms that you should watch out for:

3. Aggression and other personality changes

8. Bleeding in the brain

14. Burning sensation in the mouth

Other factors that will determine the severity and length of your symptoms:

* How long you were exposed.

* Where you were exposed (home, workplace, school).

* How high was the mold concentration in your environment.

* If you were exposed to more than one type of mold at the same time.

What the Experts Claim

A 1999 study by the Mayo Clinic, published on ScienceDaily.com had found that fungus (mold) is likely the cause of nearly all chronic sinus infections. They had said that it was not an allergic reaction to mold, but an immune reaction.

The Centers for Disease Control (CDC) had published a report titled, “Mold Prevention Strategies and Possible Health Effects in the Aftermath of Hurricanes and Major Floods,” showing that various diseases, infections and illnesses such as asthma, an immune-mediated disease known as hypersensitivity pneumonia, and longterm ingestion of aflatoxins (produced by Aspergillus species) which has been associated with hepatocellular cancer.

The American Academy of Pediatrics now recommends that when pediatricians are treating patients with idiopathic pulmonary hemorrhage, prudence dictates that pediatricians try to ensure that infants under 1 year of age are not exposed to chronically moldy, water-damaged environments.

Why Myctoxins are Dangerous to Humans and Animals

Molds like Stachybotrys produce various mycotoxins such as Trichothecene which can be very deadly. Another class of mycotoxins are known as Aflatoxin B1, B2, G1, G2, M1 and M2, which are produced by  Aspergillus (Aspergillus flavus and Aspergillus parasiticus) which can be found both indoors and outdoors. Aflatoxins are one of the most carcinogenic substances known to human kind.

No animal species is immune to the toxic effects of these aflatoxins.

Aflatoxins are poisonous and cancer-causing chemicals. They can be inhaled, ingested, but the most toxic type of aflatoxin, B1, can permeate through the skin. Children are particularly at risk from aflatoxin exposure, which leads to stunted growth, delayed development, liver damage, and liver cancer. Adults have a higher tolerance to exposure, but are also at risk.

The most common https://web.archive.org/web/20170318005502/http://en.wikipedia.org/wiki/Aspergillosissubtype among paranasal sinus infections associated with aspergillosis is A. fumigatus. The symptoms include fever, cough, chest pain, or breathlessness, which also occur in many other illnesses, so diagnosis can be difficult.

Mycotoxicoses, like all toxicological syndromes, can be categorized as acute or chronic. Acute toxicity generally has a rapid onset and an obvious toxic response, while chronic toxicity is characterized by low-dose exposure over a long time period, resulting in cancers and other generally irreversible effects (James, 2005).

What is mold and why does it make people sick?

Mold is a type of fungus that grows in moist, damp environments. As such, mold is commonly found both inside and outside homes. While most types of mold are harmless, there are many that are found indoors that can be dangerous to your health.

It is present in the air and on many surfaces. We breathe in mold spores regularly without any effect. Some people are more sensitive to mold than others. An estimated 10%-20% of the population have a genetic susceptibility to biotoxins, including mycotoxins produced by molds, according to a study published in the journal Toxins.

In some cases, people may not even be aware that they’re living or working in a moldy environment. This is because it usually grows in areas that are out of sight.

The most common places it grows are in damp environments like basements, behind walls, showers, and kitchens as a result of excess moisture that can enter buildings as a result of water leaks, floods, and high humidity.