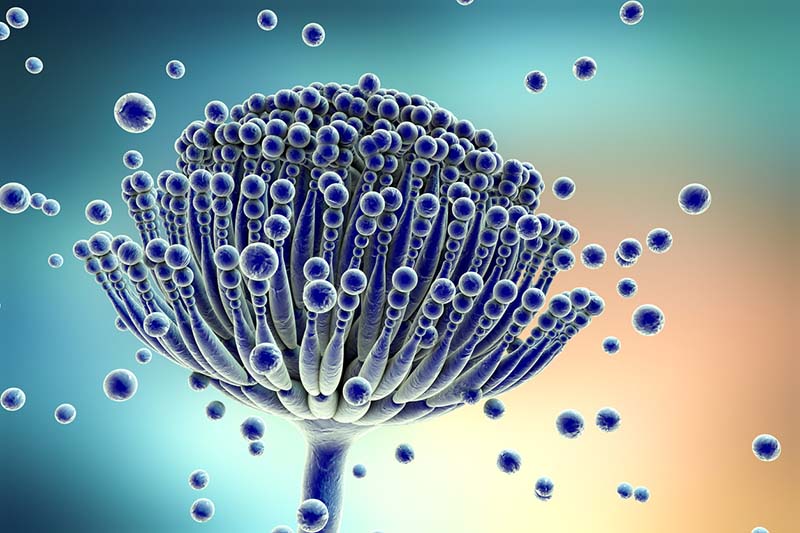 Many types of mold, also known as fungi, are some of the most toxic and deadly substances in existence. There are over 400 known species of fungus (mold) that have been proven to be toxic to animals, humans, and plants.

The main reason they can cause illness is that they release spores that produce toxic secondary metabolites that are called mycotoxins. Myco means fungal, and many molds are known to have toxic fungal metabolites (toxins) that poison humans, animals, and plants.

Mold mycotoxins are not visible to the naked eye and must be detected using laboratory testing techniques such as chromatography or mass spectrometry.

These molds and their toxins can be found all over our environment, in food, and buildings.

This includes homes with flooding from plumbing leaks or storms; homes built on poorly drained land; homes with high humidity levels; and homes with poor ventilation systems that do not allow for adequate air flow to remove moisture from the home’s interior spaces.

They can make you sick, and cause various illnesses and diseases. You can be exposed to a water-damaged building with mold for a short period of time, and suffer a lifetime of illnesses.

According to the World Health Organization, more than 200 biotoxins have been identified from common molds and can interfere with RNA synthesis and may cause DNA damage.

The history, science, and research of mold have shown that it is simply one of the deadliest biological substances in existence for well over 50 years. They are so deadly, many countries around the world, including in the U.S., have used mold mycotoxins as chemical warfare agents.

So, do not let anyone fool you or tell you that mold is not dangerous!

It has been proven through many studies that mold mycotoxins are highly toxic or carcinogenic.

They cause inflammation and cancer, allergies, asthma, and are potent immunosuppressive agents that directly affect immune cells and also modify immune responses as a consequence of tissue damage elsewhere. These diseases can also result in death if they are not treated properly.

According to one of the world’s premiere mold experts, Dr. Ritchie Shoemaker, Chronic Inflammatory Response Syndrome (CIRS), is the result of chronic inflammation produced by exposure to biotoxins (toxins produced from living organisms) that come from mold (mycotoxins).

These biotoxins travel through the body, distressing immunity, joints, the nervous system, and more. They change how you think, how you feel and even how long you live.

In the middle ages, people of western and central Europe died of the “holy fire,” or ergotism; in the 1940s many Russians died from alimentary toxic aleukia. These deaths were associated with eating food poisoned or contaminated with chemicals produced by molds (fungi).

Interest in mycotoxins was stimulated in the United States and Europe about 1960 by the death of 100,000 turkey poults in England. These deaths and the deaths of other farm animals were associated with peanut meal that contained aflatoxins produced by molds known as Aspergillus flavus and A. parasiticus.(1)

How mycotoxins enter the human body

Mycotoxins have several adverse effects on human beings, crops, and animals that result in both economic losses and illnesses. Diseases caused by exposure to mycotoxins are known as mycotoxicoses. Acute mycotoxicoses can cause serious and sometimes
fatal diseases.

When you are around a toxin black mold, you are usually exposed to airborne mycotoxins by inhaling them. These mycotoxins then end up in the lungs and causing respiratory problems and other chronic symptoms. Trichothecene mycotoxins in the air can also enter your body through the eyes or be absorbed through the skin.

Another common way that mycotoxins get into the body is by eating contaminated food. This can happen if black mold has been growing on crops. Most mycotoxins including trichothecene, remain active even after being cooked.

This is the main reason why black molds are a major problem in agriculture. In 2004, over 120 people in Kenya died after consuming maize that was contaminated with aflatoxin. There are several other cases of animals dying after consuming pet food with mycotoxins as well.

These mycotoxins produce a disease called mycosis (plural: mycoses) which is a fungal infection of animals, including humans. Mycoses are common and a variety of environmental and physiological conditions can contribute to the development of fungal diseases.

Inhalation of fungal spores or localized colonization of the skin may initiate persistent infections; therefore, mycoses often start in the lungs or on the skin. Fungal infections of the skin were the 4th most common disease in 2010, affecting 984 million people.

Some molds are capable of producing more than one mycotoxin and some mycotoxins are produced by more than one fungal species. While there are thousands of different mycotoxins, some of the most common ones include: ochratoxin, patulin, fumonisin, ochratoxin, aflatoxin (produced by aspergillus), zearalenoe and trichothecene, which are all highly toxic or carcinogenic.

Stachybotrys produces various mycotoxins, and the most deadly mycotoxins are called Trichothecene.

Trichothecenes have been of great public health concern and have led to this fungus being known as “toxic black mold.” Other mold species that have this deadly toxin are Fusarium, Trichoderma, Verticimonosporium, Trichothecium, Cephalosporium, and Myrothecium.

Trichothecenes are mycotoxins produced mostly by members of the Fusarium genus, although other genera (e.g. Trichoderma, Trichothecium, Myrothecium and Stachybotrys) are also known to produce these compounds. Trichothecenes are potent immunosuppressive agents that directly affect immune cells and also modify immune responses as a consequence of tissue damage elsewhere.

The trichothecene mycotoxins (TCT) (Fig. 4) comprise a vast group of over 100 fungal metabolites with the same basic structure. Several fungal genera are capable of producing TCT; however, most of them have been isolated from Fusarium spp. All trichothecene contain an epoxide at the C12,13 positions, which is responsible for their toxicological activity.

Trichothecenes including DON, T-2 toxin, and diacetoxyscirpenol are also important from the view of biological warfare.T-2 mycotoxins are also the only substances used in biological warfare that can be absorbed through a person’s skin.

At the cellular level, the main toxic effect of TCT mycotoxins appears to be a primary inhibition of protein synthesis. TCT affect actively dividing cells such as those lining the gastrointestinal tract, the skin, lymphoid and erythroid cells. The toxic action of TCT results in extensive necrosis of the oral mucosa and skin in contact with the toxin, acute effect on the digestive tract and decreased bone marrow and immune function (Schwarzer, 2009).(2)

Trichothecene can stay toxic for many years. It is probably the most lasting mycotoxins. Things like freezing temperatures or ultraviolet light do not have any effect on the mycotoxin. Trichothecenes resist sunlight, UV light, X-rays, heat (up to 120°C), and acids.

Aspergillus produces the major aflatoxins are called B1, B2, G1, and G2 (based on their fluorescence under UV light (blue or green) and relative chromatographic mobility during thin-layer chromatography) M1 and M2 (produced in milk and dairy products) (Fig. 1) (D’Mello and MacDonald, 1997).

Aflatoxin B1 is the most potent natural carcinogen known and is usually the major aflatoxin produced by toxigenic strains (Squire, 1981). Aflatoxins are difuranocoumarin derivatives produced by a polyketide pathway by many strains of A. flavus and A. parasiticus; in particular, A. flavus is a common contaminant in agriculture.

The U.S. Food and Drug Administration (FDA) has set limits for aflatoxin levels in food products to protect public health from this toxin’s potential harmful effects on humans who eat contaminated food products regularly over time.

This toxin is produced by Aspergillus ochraceus and Aspergillus carbonarius species of fungi that grow on coffee beans and other foods like grains, nuts and seeds that are stored for long periods of time without proper storage conditions or refrigeration.

OTA can also be found in wine from grapes exposed to contaminated soil or irrigation water containing animal manure.

Ochratoxin A may cause kidney damage if you have a history of kidney disease or consume large quantities regularly over time.

The American Academy of Allergy, Asthma & Immunology says that the most common allergy-causing molds include Alternaria, Aspergillus,Cladosporium and Penicillium. These molds can be found both indoors and outdoors. When these tiny mold spores become airborne, they can cause severe allergic reactions in people who have mold sensitivity issues, allergies and/or are immune compromised.

Prolonged exposure to mold can cause severe and dangerous effects, often compounded by allergic reactions to the mold spores. These symptoms include vomiting, nausea and bleeding in the nose and lungs. Mycotoxins may damage the lungs, brain, liver, kidneys, heart, blood, or nervous system. They can produce facial eczema, and induce cancer or other effects.

Molds like stachybotrys chartarum and aspergillus or black mold normally release spores into the air as it feeds on organic substances like carpets, drywall or damp sub-flooring. These spores if inhaled or ingested, can result in a wide range of unpleasant and dangerous symptoms in human beings.

The most common black mold health effects and symptoms include: sneezing, chronic coughing, irritation to the eyes, breathing problems, rashes, mucus membranes of the throat and nose, plus persistent headaches.

Aspergillus produces aflatoxin which is associated with both toxicity and carcinogenicity in human and animal populations. The diseases caused by aflatoxin consumption are loosely called aflatoxicoses.

Aspergillus causes a group of diseases called Aspergillosis. The most common subtype among paranasal sinus infections associated with aspergillosis is A. fumigatus. The symptoms include fever, cough, chest pain, or breathlessness, which also occur in many other illnesses, so diagnosis can be difficult.

Mycotoxicoses, like all toxicological syndromes, can be categorized as acute or chronic. Acute toxicity generally has a rapid onset and an obvious toxic response, while chronic toxicity is characterized by low-dose exposure over a long time period, resulting in cancers and other generally irreversible effects (James, 2005).(2)

Other symptoms of black mold include:

Please keep in mind that these effects depend on things like health, immune system, age, diet, exposure level and gender of the affected person. The elderly, children and individuals with weaker immune systems will also be worse affected by the mycotoxin.

The reality is that mold mycotoxins can be overwhelming, especially for people who have been exposed to them for a long time and are not aware of what they are. Exposure can lead to high levels of mycotoxins developing in the human body. This may cause a variety of health problems: headaches, fatigue and sleep disturbances, weight gain or loss, excess mucus, cancer, and more.

Some of these symptoms are short term and some can have long term health effects due to mycotoxins being chronic.

Speaking of long term, you should schedule a mold inspection if you suspect mold in your home. A professional can test your home for these toxins and help locate the problem areas in your home so you know where to target your cleaning efforts.

2. Impact of mycotoxins on humans and animals Mohamed E. Zain

5. The Health Effects of Toxic Mold

6. Other sources such as Wikipedia are linked to in blue