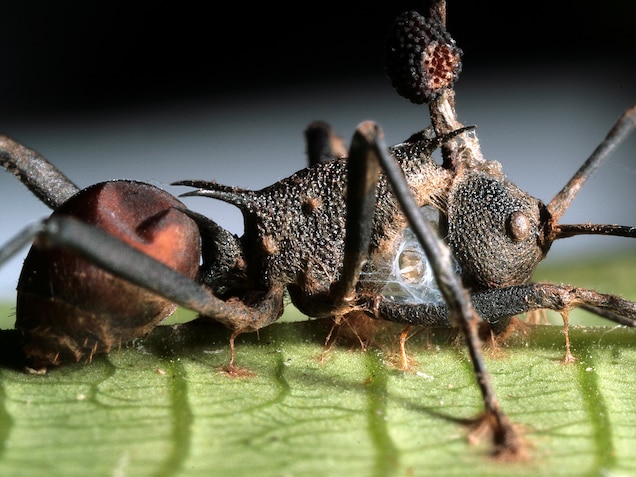 “Parasitic fungi absorb nutrients from the body fluids of its host, and may produce specialized hyphae called haustoria that penetrate a host’s cell wall and lie against the plasma membrane, where they can both absorb food.” – University of Las Vegas

One of the key factors in treating a toxic mold illness is understanding exactly what various molds do to our bodies and how they affect the various nutrients, minerals, and vitamins that we humans need for optimum health.

Many people falsely assume that human parasites only consist of the many different worms that inhabit our bodies and can cause diseases like tapeworms, roundworms, and pinworms.

But the facts are there are many molds that are also considered parasites.

Just like the mold/fungus known as Cordyceps grows into the body and brain of an ant to make it climb a plant, then attach itself near the top. 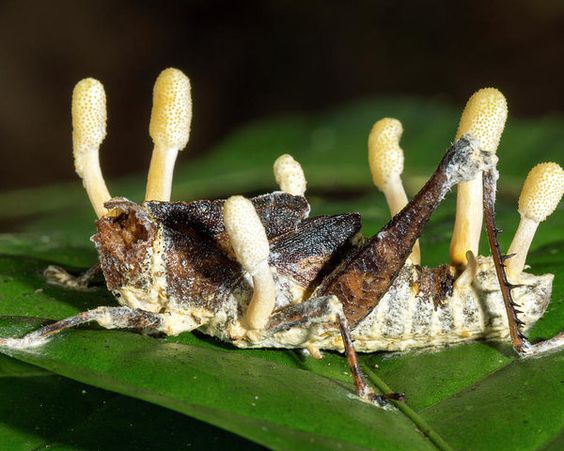 It then kills the ant by devouring its brain, before sprouting a mushroom from the top of its head, which disperses its spores into the air to spread as far as possible.

There is a bizarre story about ants and fungus that has been around for the last 150 years. In 1959, it was first discovered by Alfred Russell Wallace in Indonesia.

The fungus causes the ant to behave strangely, which, in turn, makes it much easier for the fungus to reproduce.

The fungus slowly grows through the ant’s body, using organs as food, while the strong exoskeleton protects the fungus from drying out, being eaten, or getting infected again.

First, by using the ant as a walking food source, and second, by damaging muscles and the ant’s central nervous system,” he said.

“The result for the ant is zombie walking and the death bite, which place the ant in the cool, damp understory. Together these events provide the perfect environment for fungal growth and reproduction.”

I believe that mold does similar things to humans.

What you need to understand is that there is a lot of bad information about mold illness and disease going around the internet and bad advice in the various Facebook groups.

One of the most common that I have seen relates to people who claim that fungal infections or “mycoses” are very rare and that the molds found in our homes cannot infect and grow in our bodies.

They say that only the toxins released from various molds can make you ill and cause disease.

For example, I recently had a debate with a man in a Toxic Mold Group on Facebook who claimed to be a mold specialist and nationally recognized expert in Indoor Environmental Quality with decades of experience.

He basically said that fungal infections are rare and that mold found in our homes cannot grow in and on your body. Here are some of his exact words:

Here are some of his exact words:

“Contrary to Moe’s comments, mold is rarely an infection (or as he calls it, a parasite; also, mold infection is like a virus or bacteria infection.

A parasite usually lives inside the body and its effect is sub-clinical, aka no overt symptoms.

When nearly all people in this group discuss mold, they discuss the effects of mold in the environment. That mold is growing in the building NOT in/on you. Infection are rare,” he concluded.

But this is not true, and I will prove it to you in this article.

In fact, this advice is dangerous and can be deadly to those people out there who do have fungal infections and are not addressing these infections with the proper antifungals, which is a very important aspect of a health protocol.

The simplest way to wrap your mind around this is by acknowledging that various molds are not only pathogens that release secondary metabolites called mycotoxins which can cause illness and disease, they are also considered parasites that live in or on another organism (its host) and benefits by deriving nutrients at the host’s expense.

This is exactly what mold does in the human body and the precise reason why many people who are sick from mold suffer from a multitude of vitamin and mineral deficiencies.

It does the same thing to plants, trees, and other animals. Humans are no different. We are not immune from these molds growing in and on our bodies as they steal our vital nutrients and make us weak, ill and diseased.

It is well known in the science of mycology (mold science) that parasitic molds (fungi) cause a wide variety of diseases in plants, animals, and humans.

Most of these parasitic molds are members of the class Fungi imperfecti, since they reproduce only asexually.

The body of a parasitic fungus consists of branching multicellular filaments (hyphae) of the mycelium that it uses to attach to the cell wall of its host to absorb its nutrients.

There are many different types of molds that live on and in the human body which classifies them as parasites. For example, one of the most common are those that cause athletes foot, ringworm and candida yeast infections are imperfect fungi.

Professor Neil Gow, from the University of Aberdeen, had said that a million people die a year from fungal infections:

“Most people know about mild fungal infections, but nobody’s ever died from athlete’s foot. However, a million people die a year from fungal infections and we need to understand these different types of infection and how to deal with them. It’s an underappreciated problem and it’s a very serious challenge in the parts of the world least equipped to deal with it.”

Are the molds that are found indoors parasitic?

Many of these same parasitic molds that are killing people can be found within our homes and commercial buildings. Molds like aspergillus, penicillium, and cladosporium, to name a few.

The facts are that many of the parasitic molds (fungi) found indoors can cause fungal infections or “mycoses” for the inhabitants that breathe in the mold spores and mycotoxins, and also through dermal and oral exposure.

For example, one of the most common molds that are found indoors is aspergillus.

Aspergillus is well known in the scientific community of mycology to produce numerous fungal infections under the general label of Aspergillosis.

This can cause numerous infections, such as a fungus ball in the lungs that may cause a cough, fever, repeated coughing up of blood, chest pain, and occasionally severe, even fatal, bleeding.

Poorly controlled aspergillosis can disseminate through the blood stream to cause widespread organ damage.

Aspergillosis of the ear canal causes itching and occasionally pain. Fluid draining overnight from the ear may leave a stain on the pillow.

Aspergillosis of the sinuses causes a feeling of congestion and sometimes pain or discharge. It can extend beyond the sinuses.

These infections occur more in immune compromised people, but they also infect people who do not have weakened immune systems.

How do these molds parasite humans and steal our nutrients?

A fungus is a eukaryote that digests food externally and absorbs nutrients directly through its cell walls. The absorptive lifestyle of fungi is intimately associated with 2 important characteristics: production of spores and hypha (mycelial growth).

A spore is a tiny, usually haploid, cell that disperses the fungus to new habitats, usually by floating through the air.

The production of many tiny spores increases the chance that at least a few will fall onto a suitable food source, germinate, and start absorbing food, and then grow into a thread-like hypha.

The hyphae, which develop right after spore germination, put out powerful enzymes needed to digest food for the fungus.

The body of a fungus, made up of many hyphae, is called a mycelium. The mycelium is well-suited to absorbing food. It has a high surface-volume ration permitting the surface exposed to the external food source to absorb enough food to nourish the enclosed body of cytoplasm.

Parasitic fungi absorb nutrients from the body fluids of its host, and may produce specialized hyphae called haustoria that penetrate a host’s cell wall and lie against the plasma membrane, where they can both absorb food.

These parasites (fungi/molds) can feed on your flesh, blood, your vitamins, and minerals.

They like almost all the same nutrients humans require for our health, such as carbon, oxygen, hydrogen, proteins, phosphorus, sulfur, potassium, magnesium, iron, zinc, manganese, copper, calcium, molybdenum, and gallium are needed by most fungi for vigorous growth.

Most fungi appear able to synthesize all other vitamins necessary for their growth and reproduction.(Encyclopedia Britannica)

They do so until your body and health starts to break down so they can kill and eat you. If you do not resupply the vital vitamins and nutrients these parasitic fungi are stealing from your body, you will eventually become deficient and illness and disease will set in.

If you are functioning properly, you can get to work at restoring your health and getting your life back on track.

Part of this process involves killing the mold in your body. I know some people hate to hear these words “kill mold.”

But the facts are, if you do not kill the mold in your body, it will continue to reproduce, grow and multiply until it kills you.

Make no doubt about it. This is a fight for your health and life.

These are the simple laws of war.

Fortunately, the weapons you need to fight with are not dangerous and most likely will not hurt you in the process.

The products I like to use in order to kill the parasitic mold in my family’s bodies are done with natural antifungals that have no to very little side effects, such as oregano oil, grapefruit seed extract, garlic or garlicin, clove oil, cat’s claw, and MCT oil, to name a few.