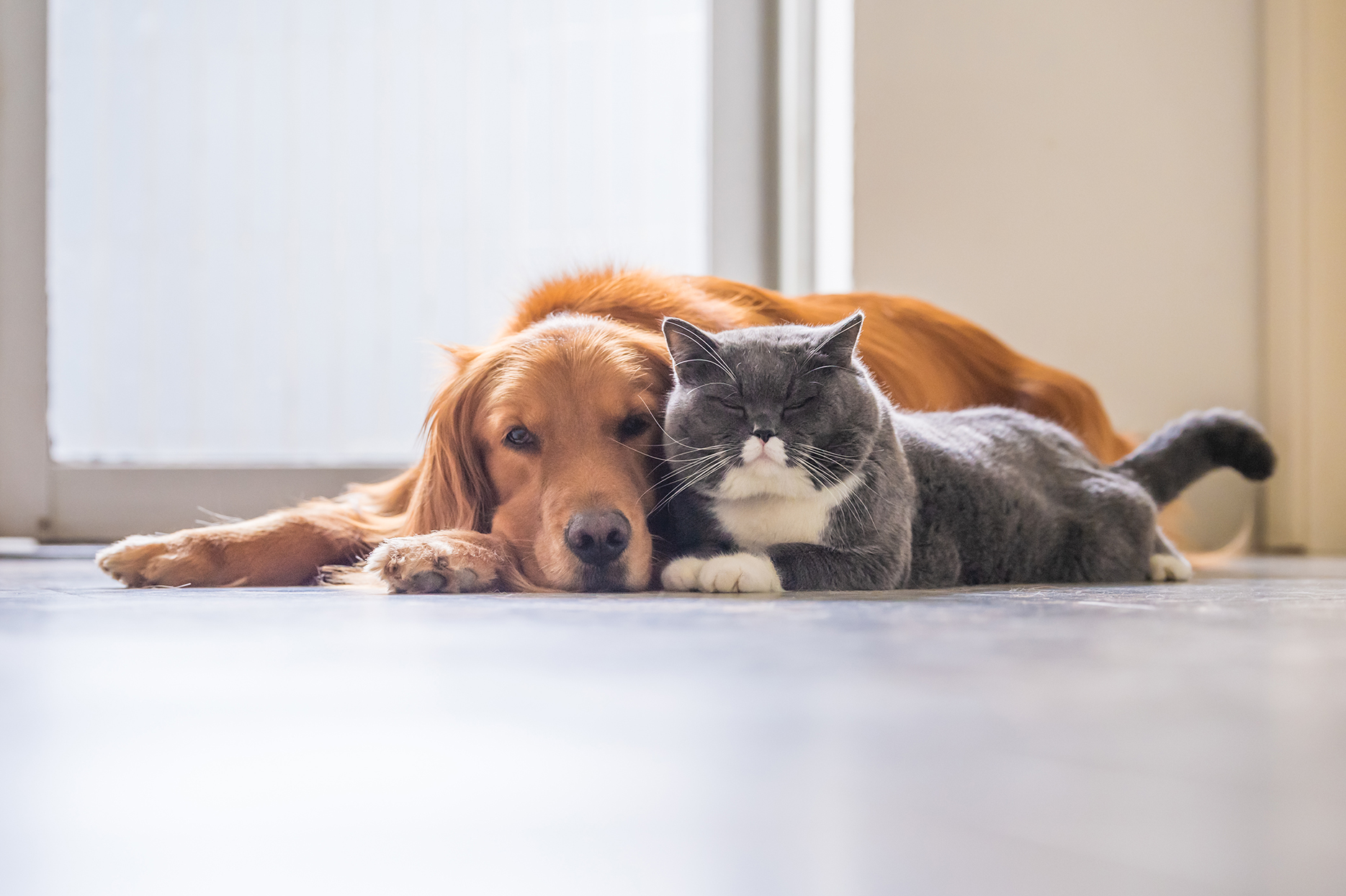 Toxic molds can cause disease and death in all living organisms such as plants, trees, insects, humans, and even domesticated animals like your cat and or dog.

Animals often suffer from the same symptoms as humans do when they are exposed to toxic mold. Symptoms such as allergic reactions like a constant runny nose, watery eyes, congestion, sinus infections, asthma, open sores that won’t heal, and itching and scratching when no fleas are present.

They can also have other serious health symptoms such as inflammation, joint pain, chronic fatigue, depression, fungal skin diseases such as ringworm and many other life-threatening diseases.

The American Veterinary Medical Association (AVMA) lists fungi has one of the main causes of illnesses and diseases for pets such as dogs. The AVMA had stated;

In general, the fungus infects the body through the respiratory tract and causes fever, coughing, lethargy and flu-like or pneumonia-like signs. If eaten, digestive problems (e.g., pain, diarrhea) can occur.

Immunosuppressed dogs (dogs whose immune systems are weakened because of disease or certain medications) are much more likely to become infected with these fungi and develop disease.”

There have been many studies over the years that document the illnesses and deaths of animals due to toxic mold exposure that I would like to share with you. In addition to these studies, I have also met many people who have claimed that their pets were very ill or had died after living in a moldy property. I will share some of these sad testimonies with you below as well.

Pathogenic molds create a toxic secondary metabolite called mycotoxins that are very dangerous to animals and humans. The term mycotoxin was coined in 1962 after approximately 100,000 turkey poults died near London, England from a mysterious disease that was later linked to a peanut (groundnut) meal contaminated with the mold, Aspergillus flavus and its mycotoxins, aflatoxins.

I had written about this mold before in my article, Aspergillus: One of the Most Common and Deadly Organisms in Existence. Aspergillus produces aflatoxins that are often found in both human and animal food associated with both toxicity and carcinogenicity in human and animal populations.

The researchers had documented that as early as 1952, a case of hepatitis in three dogs on a farm in Queensland who became ill and died was directly linked to consumption of moldy pet food. They found it was aspergillus aflatoxins responsible for their deaths.(1)

A 2007 study, co-authored by Douglas Mader, DVM, of Marathon Veterinary Hospital in Florida, and Dorr Dearborn, Ph.D., MD, of Case Western Reserve University in Cleveland, had documented the story of two Himalayan cats who had gone in for a routine dental cleaning and prophylaxis, but died because they were exposed to toxic black mold (Stachybotrys chartarum) in their home.

They both went pre-operative physical examinations and laboratory testing with Mader which were unremarkable. But approximately 15 to 20 minutes after administration of isoflurane was begun, frothy blood was noticed within the endotracheal tube. Mader immediately stopped the procedures when he saw the frothy blood, and the cats were allowed to recover from anesthesia.

After the cat’s death, Mader had said, “The circumstances of these cases are just not heard of. Anesthesia doesn’t cause pulmonary hemorrhage.”

Mader had the cat’s blood tested and tests revealed the presence of the banked serum revealed satratoxin G, a biomarker for Stachybotrys chartarum, also known as toxic black mold, which can cause respiratory-related health problems, pulmonary hemorrhage and death in animals and people. He then did what any good doctor would do and tried to find the source of the black mold.

He says he suspected the pet owner’s home had this deadly mold because the area they had lived in had been devastated by hurricane and flooding in October 2005. After Mader had questioned them, he discovered that their home had sustained extensive water damage during the hurricane just seven months before the cats had died. The clinical findings stated that the cats were siblings and lived together.  then requested that the pet owners have their home tested for mold.

Mader then requested that the pet owners have their home tested for mold.

“Sure enough, they had very severe mold contamination in their walls,” he says. The walls have since been gutted and replaced.

The researchers concluded that the findings highlight the potential risk of acute pulmonary hemorrhage in animals living in an environment contaminated with mold following flood damage.(2)

Pets are also known to carry mold spores in their hair/fur in which I documented in my article, “Are you allergic to cat and dog hair or the molds/fungi they carry in their hair?”In a 1996 study of stray cats in Iran, researchers examined the fungal flora of the hair coat of 100 stray cats in different districts of the city of Isfahan, Iran, were examined. Saprophytic fungi were isolated from all cats. Meaning 100% of the cats tested positive for various molds in their hair and skin. Penicillium, Aspergillus, Alternaria, Mucor and Cladosporium spp. were the most frequently isolated saprophytes.(3)

The fungal flora of the coat of 172 healthy pet cats was examined qualitatively in a 1991 study. Fungi were isolated from 136 (79%) of the 172 cats. Fifteen genera were isolated; 13 are commonly regarded as saprophytes, and 2 (Microsporum and Trichophyton) are commonly regarded as pathogens. Aspergillus, Alternaria, Penicillium, and Cladosporium spp were the most frequently isolated saprophytes.

Dermatophytic fungi, including Microsporum gypseum (n = 1), M vanbreuseghemii (n = 1), and Trichophyton rubrum (n = 14), were recovered from 16 cats. Microsporum canis was not isolated from any cat during this study.(4)

The Science of Molds and Mycotoxins With Other Animals

Animals are often the victim of toxic mold exposure due to massive commercial farming, poor oversight, and mold-contaminated food. The symptoms animals experience often mirror the same symptoms that humans suffer from. Many studies have documented the ill effects of molds and their mycotoxins on various animals such as poultry, horses, cattle, sheep, pigs, rats, and mice to name a few.

There have also massive animal die-offs occurring around the globe due to toxic molds.

The American Veterinary Medical Association (AVMA) posted 2010 article where they tell the story of Dr. John W. Hicks who had a client that lost about 100 swine after a 4,000-head herd ate feed produced from corn that had sustained hail damage prior to harvest.

The corn producer did not know the feed contained a relatively high concentration of vomitoxin, a fungal toxin that can develop on various grains including corn, wheat, rye, and barley.”The pigs refused to eat feed, even though it was aptly available to them,” Dr. Hicks said. He later added, “There was actually a fairly high number of gastric ulcers as a consequence of them being off feed.”

The negative effects of mycotoxins on various animals was thoroughly documented in a 2012 study. For example, chickens who have been exposed to toxic molds have been demonstrated in numerous studies.

The effects of the molds such as aspergillus and aflatoxins on cattle as been thoroughly documented. Like humans, it suppressed the immune system and several mechanisms of bovine immunosuppression by AFB1 have been illustrated in vitro. Aflatoxins also affect the quality of milk produced by dairy cows and result in carry-over of AFM1 from AF-contaminated feed. The T-2 toxin is also believed to induce immunosuppression in cattle, induce necrosis of lymphoid tissues, infertility, abortion, ulcers in the abomesum and sloughing of the papilla in the rumen (Cheeke, 1998a).(1)

Gina Lopez from the movie moldy had made this statement on mold and her pet cat:

“YES, THE ARE EFFECTED TOO.”

When we were being exposed to toxic, my cat Chainsaw, was also sickened..his fur had changed, and like mine, it had turned strawlike and ugly… After we moved, he was no longer an outdoor cat, and I also then discovered from the cat box, that there was a lot of blood in his stool.

Since being out of exposure, he has also recovered. Blood is gone and fur is normal again. He does have spinal issues now too, but not sure where he got disc damage from.. but note, I also have disc damage badly since my exposure and Iris, the dammed tumor on mine.”

“I just got told by a friend that her two cats died of cancer in a moldy house.”

“My two cats got very sick from living in a WDB, and one died. I remember reading this abstract back then as I was trying to figure out what was wrong with them. I researched for probably a month or two, while trying to nurse both of them (force feeding and a series of meds timed apart-almost like my own treatment protocol now I just realized).

By comparing their list of symptoms to all the possible causes (h pylori, pesticides, etc), I ended up landing on mycotoxin poisoning.

It wasn’t even on my radar before the research. Hindsight is 20/20. Looking back, 4 years into living there both the cat that died and myself were diagnosed in the same month with autoimmune diseases.

The noticeable onset starting approximately 1.5 to 2 years before diagnosis…and really probably started soon after we moved in on a cellular level.

My other cat survived, but developed a little white patch of fur from the poisoning. Your timing is uncanny for me, as the end of July was the anniversary of when this all started. Four years ago today I was researching and trying to keep two cats alive.”

“My cats both got liver cancer, 2 years apart. Brother and sister.”

“My cat got cancer and died.

The sad thing is she didn’t have as bad exposure or nearly as long as the rest of us.
I got her out before I knew it was mold.

One of the kids and my ex have allergies to cats so she went to live with my brother and niece. I just found out she died of cancer .”

“Our dog of 16 years died of cancer that was caused by long term mold exposures.”

“I believe our dog’s death was the result of mold in our house.

“killed both of my beloved pets .. each one month apart.”