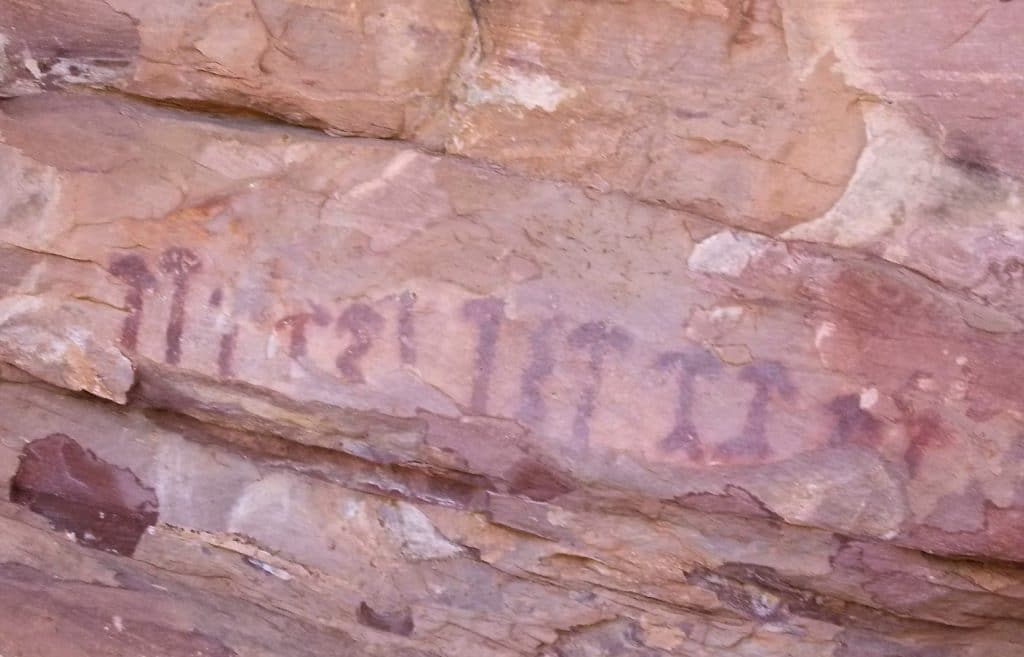 Some of the earliest evidence of mushroom use was discovered on rock art found at Villar del Humo in Spain, which is believed to be over 6000 years old.

Researchers from the University of Valencia have discovered the mushroom paintings in Selva Pascuala, a rock cave that contained about forty paintings of mushrooms, some of which were illustrated with dots.

The artwork depicts what appears to be the face of a human with eyes above it.

There are also several paintings of mushrooms rendered in red pigments that experts believe are representative of real mushrooms that were used by our ancestors for their psychoactive properties.

Researchers say that the paintings appear to illustrate a specific species of psychoactive mushroom: Psilocybe hispanica, the only psilocybin mushroom native to the Iberian Peninsula.

This species is known for its psychoactive effects, which include euphoria and hallucinations.

The images appear on rocks near a burial site, which suggests that they may have been used as part of religious or shamanistic rituals. The drawings show a few people holding what appear to be large mushrooms in their hands and eating them. In one drawing, a stick figure is shown standing on top of two mushrooms.

Archaeologists in Spain have also discovered a carving from La Huérguina and engraved art was found in three sites in the La Huérguina rock shelter — a cave above the Tagus River near the town of Córdoba — and depict what appear to be two species of mushroom: Psilocybe hispanica and Psilocybe medullosa.

Mushroom experts say that while it’s impossible to know with certainty what the artists intended to represent, the depictions are consistent with those particular mushrooms, both of which grow wild in Spain today.

A number of prehistoric art sites around the world appear to contain depictions of hallucinogenic mushrooms, and there is also evidence that these fungi were used in prehistoric burial sites.

In 2012, for example, an archaeological team led by Peter Beharie from the University of Mississippi found evidence suggesting the presence of hallucinogenic alkaloids — potentially from hallucinogenic plants — in residue on clay pots associated with burial sites dating back several thousand years in North Africa.

These mushroom-related artifacts are thought to have been made during a time when shamanistic or religious rituals were more common, and they suggest that people believed that psychedelic mushrooms had the power to connect them with the supernatural world.